Hon. Mr.Upendra Yadav, Deputy Prime Minister and Minister of Health and Population, had a bilateral meeting this afternoon with Dr. Tedros Adhanom  Ghebreyesus, Director General of the World Health Organization (WHO), on the sidelines of the 72nd World Health Assembly. Matters of bilateral interest, particularly effective implementation of the universal health coverage, ensuring basic health services and support and cooperation for the least developed countries in the development of health sector was discussed during the meeting. Hon. Deputy Prime Minister also invited the WHO Director General to visit Nepal during a global conference on Scaling Up Nutrition to be hosted in Kathmandu in November 2019.

Similarly, Hon. Yadav and Health Minister of the Maldives His Excellency Mr. Abdulla Ameen had a meeting at the Permanent Mission of Nepal and exchanged views on promoting bilateral relations in the health sectors including through continued cooperation in medical and nursing studies.

Later in the afternoon, Ms. Gerda Verburg, coordinator of the Scaling Up Nutrition (SUN) Movement called on the Deputy Prime Minister at the Mission and discussed about advancing health and development through improved nutrition and global partnership.They looked forward to successful organization of a global gathering on scaling up nutrition to be hosted in Kathmandu on 5-7 November 2019.

Dr. Pushpa Chaudhary, Secretary at the Ministry of Health and Population, H.E. Mr. Mani Prasad Bhattarai, Ambassador/Permanent Representative of Nepal, and other members of the delegation were present during the occasions.

The Deputy Prime Minister and Minister of Health and Population is returning to Kathmandu tomorrow.

Permanent Mission of Nepal to
United Nations Office and other International Organizations
Geneva, Switzerland
22 May 2019 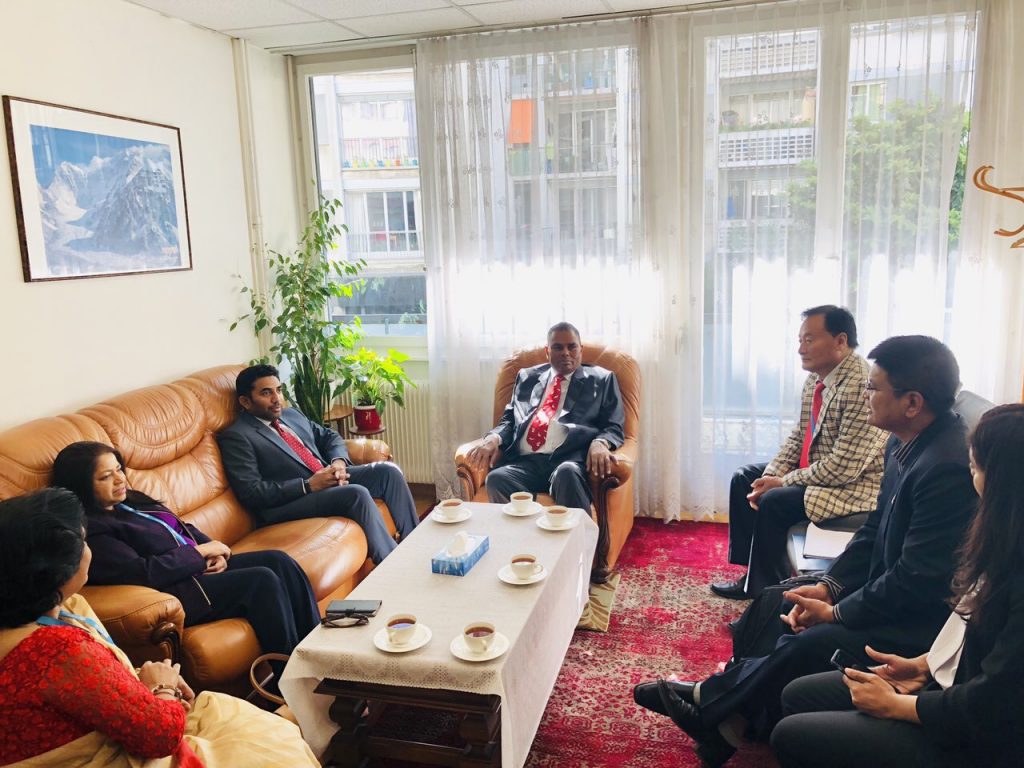 DPM with Maldivian Health Minister, 22 May 2019